The China-based smartphone manufacturing company Oppo, launched the Oppo K3 smartphone back in May this year in China. However, it was just a matter of time Oppo launching the K3 smartphone in India. Oppo has started teasing the people in India with a teaser on Amazon.in. It is expected that the Oppo K3 will be launched in India by the end of this month. The teaser gave a sneak-peak into the smartphone and its peculiar features. The teaser doesn’t reveal the name of the upcoming smartphone but it shows some hint which indicates that the new device will be Oppo K3.

Earlier this year, Oppo K1 was launched and it was regarded as one of the most affordable smartphones with an in-display fingerprint sensor. The upcoming Oppo K3 will be the successor of the earlier launched device and it is expected that it will also have amazing features at an affordable price. Since it is already launched in China, its specifications are already known. The device will be having a pop-up selfie camera. The smartphone comes with a 6.5-inch AMOLED display with a resolution of 1080 x 2340 pixels and carries an aspect ratio of 19:5:9 without any notch design on the display. 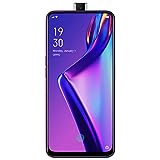 The teaser image shows some hint of the new device like image mentions eye protection that indicates the TUV Rheinland certification of the K3’s display which dramatically cuts down the harmful blue light emission. The image also indicates the 91.1 percent screen-to-body ratio, and Corning Gorilla Glass protection. The phone runs on the Android Pie (9) operating system and it is powered with Snapdragon 710 SoC processor. The smartphone will be fueled with a 3,765 mAh non-removable battery. The phone has WiFi 802.11 ac (2.4GHz + 5GHz), Dual 4G VoLTE, Bluetooth 5, USB Type-C and GPS + GLONASS for connectivity. It has a dual rear camera with 16MP + 2MP camera sensor with an LED flash and at the front, there is a 16MP pop-up camera. The device will be having 8GB RAM and up to 256GB of storage.

There are no words on the price of the Oppo K3 in India but it is expected that it will be among the most affordable phones with pop-up selfie camera in the country. The official date of its launch is not yet out but is expected to get launch by the end of this month. As soon as we get any update about its launch we will let you know.

Why Whatsapp Status is Reduced to 15 Second Limit?