Roman Nurik, the developer for the amazing digital clock widget is again in the list top android apps with a new app called – “Muzei Live Wallpaper“.  Muzie is Wallpaper app which takes pretty pictures, adds some Gaussian blur to them, and stick it to your home screen. It is also known as a living museum for your Android home screen. Muzei is a transliteration of the Russian word музей, which means “museum.”

Mizei Live Wallpaper app changes your wallpaper daily with amazing artworks. It also recedes into the background, blurring and dimming artwork to keep your icons and widgets in the spotlight. There are famous works of art by Thomas Eakins, Mona Lisa painting and many more which are added daily. A user can simply change the blur and dim factors of the wallpaper by moving into the advanced setting options.

There are two sources of wallpaper present by default in the app. The first one is featured art and the second is my photos. In featured art daily new artwork is showcased and it is selected by default. The second option provides even more customization, by selecting my photos users can select various pictures from their gallery to set as muzei wallpaper. Over here you have an option to change the period after which the wallpaper will change which is known as refresh option.

A user can just simply double touch the wallpaper or open the Muzei app to enjoy and explore the artwork in its full glory and clarity. If you double tap the wallpaper will be set clear for few seconds and later it will be back to be blur and dim. It actually give focus to the apps and widgets on the home screen and also does not bore the user by changing wallpaper regularly.

Muzei Live Wallpaper is also Developer-Friendly. That is similar to DashClock where other developers can make the extensions which can be used within it. The API and the example of extension is also given on the Muzei website. So there are many extensions created by other developers to enhance the beauty of your home screen.

The sad thing is that Muzei Live Wallpaper require android version 4.2 and above, which means it is compatible with only jelly bean and the kitkat version of Android. The size of the app is also manageable which is 1.8 MB and the Muzei Live Wallpaper have already got more than 100,000 downloads. It is of Medium Maturity and We at Above Android are sure that you will like this amazing app for sure. 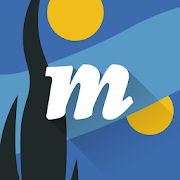